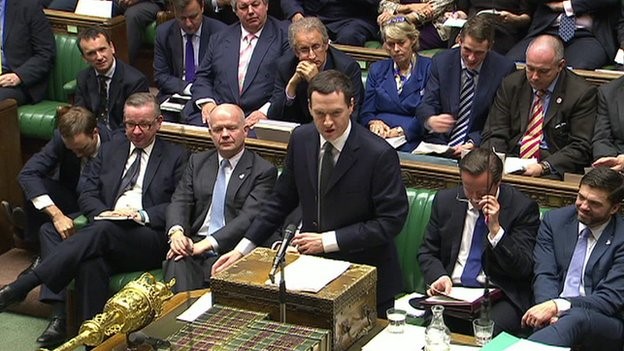 George Osborne is the UK Chancellor (Finance Minister) who traditionally issues an Autumn Statement setting out the state of the UK economy, and any planned changes to tax and finances since the Budget in March.

A significant reduction in social benefits had been predicted, but due to public opposition to the original proposals the amount of these cuts has been reduced by about half. However, the plans to withdraw benefit payments from people who leave the UK for more than 1 month have been retained. There will still be a £12 billion reduction in social welfare spending by 2020. Some of this is paid for by larger than expected receipts from taxes, suggesting that the efforts to reduce tax evasion have been more successful that was first expected.

Policing, health, education, international aid and defense budgets protected in real terms. Some old prisons, usually in city centers, will be sold for house building, and new, cheaper to manage, prisons built in new locations. There is some new spending to increase anti-terrorism activities.

Spending on the Health service to increase by £19 billion per year to £120 billion, with an additional £6 billion this year.

There will be a 3% points increase in Stamp duty (the tax on house sales), where the property is rented out rather than being occupied by the owner (buy to let).

The state pension (old age pension) is to rise by 2.9%, which is much more that inflation, in 2016, and spending on transport infrastructure is to increase by 50% by 2020.

The Government expects the economy to continue growing, at between 2.3% and 2.5% for the next 5 years, and Government borrowing to reduce from £73.5 billion this year to £4.6 billion in 2018.

There is still room for changes of course, but the UK economy is strong and growing, despite some of the difficulties being experienced in Europe and elsewhere. The position of the UK and the 5th largest economy in the world appears to be secure.